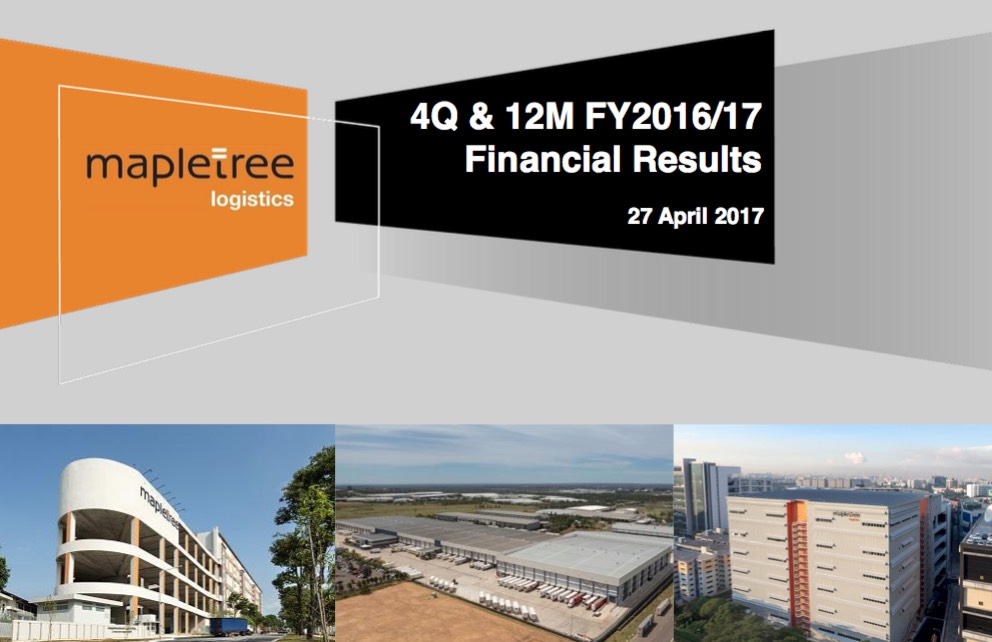 “We are encouraged by MLT’s DPU growth in 4Q and resilient performance for FY16/17, despite a challenging leasing environment. Looking ahead, we will continue to improve the quality of the portfolio and drive marketing and asset management to deliver sustainable unitholders’ returns.”

Ms Ng Kiat, Chief Executive Officer of MLTM, said, “We are encouraged by MLT’s DPU growth in 4Q and resilient performance for FY16/17, despite a challenging leasing environment. Looking ahead, we will continue to improve the quality of the portfolio and drive marketing and asset management to deliver sustainable unitholders’ returns.”

During FY16/17, the Manager completed approximately S$313 million of acquisitions comprising eight properties in Australia and one each in Malaysia and Vietnam. The Manager also divested 20 Old Toh Tuck Road in Singapore for S$14.25 million. As at 31 March 2017, MLT’s portfolio comprised 127 properties of which 50 are located in Singapore, 8 in Hong Kong, 22 in Japan, 9 in Australia, 15 in Malaysia, 9 in China, 11 in South Korea and 3 in Vietnam.

MLT’s portfolio of 127 properties was valued at S$5.5 billion as at 31 March 2017 by independent valuers. The value takes into account a net fair value gain in investment properties of S$39 million, attributable mainly to properties in Hong Kong, approximately S$377 million in acquisitions and capital expenditure, as well as a translation gain of S$68 million. Consequently, net asset value per unit of MLT rose to S$1.04 as at 31 March 2017, compared to S$1.02 a year ago.

MLT’s portfolio fundamentals remain resilient. Portfolio occupancy was stable throughout FY16/17, ending the year at 96.3%, up slightly from 96.2% a year ago. The portfolio weighted average lease term to expiry (by net lettable area) is approximately 4.0 years, with around 46% of the leases expiring after three years and beyond.

Total debt outstanding increased by S$126 million year-on-year to S$2,184 million as at 31 March 2017. This was due to approximately S$92 million loans drawn to partially fund acquisitions and capital expenditure, and higher translated loans of S$34 million attributable to the appreciation of JPY, AUD and HKD. The S$377 million acquisitions and capital expenditure completed during the year were also partially funded by the S$250 million perpetual securities issuance, divestment proceeds, proceeds from the Distribution Reinvestment Plan and working capital.

In line with its proactive capital management approach, the Manager has successfully refinanced approximately S$199 million of foreign currency loans due in FY17/18. Consequently, total debt maturing in the coming financial year has been reduced to approximately S$110 million or about 5% of total debt as at 31 March 2017, while MLT’s average debt duration has been extended to 3.9 years, from 3.5 years last quarter.

Through proactive lease management efforts, the Manager has reduced concentration of single- tenant master lease expiries, resulting in a well-staggered lease expiry profile. In FY17/18, 17.5% of MLT’s leases (by net lettable area) will be expiring, of which 14.6% are leases for multi- tenanted buildings and 2.9% for single-tenanted buildings. The Manager will continue its efforts to maintain stable occupancies.

The Manager continues to pursue opportunities for strategic acquisitions and asset enhancements. The ongoing redevelopment project at 76 Pioneer Road in Singapore is on track for completion in 3Q FY17/18. Construction of the redevelopment project at Ouluo Logistics Centre in Shanghai, China will commence in May 2017. The gross floor area of these two projects will double to approximately 153,000 sqm. The downtime from both projects will not have a material impact on FY17/18’s DPU.

The Manager maintains a disciplined and prudent approach to capital management. To mitigate the impact of foreign exchange and interest rate fluctuations on distribution, about 81% of MLT’s total debt has been hedged into fixed rates while about 72% of income stream for FY17/18 has been hedged into or is derived in Singapore dollar.

This Announcement is for information only and does not constitute an invitation or offer to acquire, purchase or subscribe for units in MLT (“Units”). The value of Units and the income derived from them may fall as well as rise. Units are not obligations of, deposits in, or guaranteed by, the Manager or any of its affiliates. An investment in Units is subject to investment risks, including the possible loss of the principal amount invested Investors have no right to request the Manager to redeem their Units while the Units are listed. It is intended that Unitholders of MLT may only deal in their Units through trading on the Singapore Exchange Securities Trading Limited (“SGX-ST”). Listing of the Units on the SGX-ST does not guarantee a liquid market for the Units. The past performance of MLT is not necessarily indicative of its future performance. This release may contain forward-looking statements that involve risks and uncertainties. Actual future performance, outcomes and results may differ materially from those expressed in forward-looking statements as a result of a number of risks, uncertainties and assumptions. Representatives examples of these factors include (without limitation) general industry and economic conditions, interest rate trends, cost of capital and capital availability, competition from similar developments, shifts in expected levels of property rental income, changes in operating expenses, including employee wages, benefits and training, property expenses and governmental and public policy changes and the continued availability of financing in the amounts and the terms necessary to support future business. You are cautioned not to place undue reliance on these forward looking statements, which are based on current view of management on future events. The information in this Announcement must not be published outside the Republic of Singapore and in particular, but without limitation, must not be published in any United States edition of any publication.