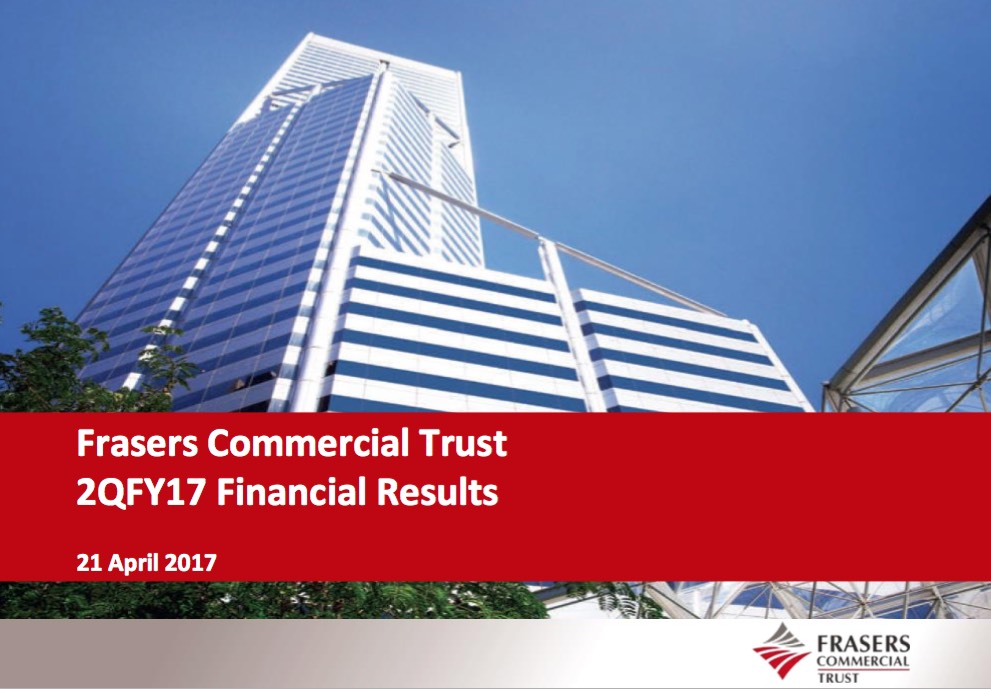 “We are pleased to deliver another healthy set of results and stable DPU performance notwithstanding continued challenges and uncertainties in the market environment.”

Frasers Centrepoint Asset Management (Commercial) Ltd (“FCAMCL” or the “Manager”), the manager of Frasers Commercial Trust (“FCOT”, SGX:Frasers Comm Tr), is pleased to announce that for the financial quarter ended 31 March 2017 (“2QFY17”), FCOT’s distributable income to Unitholders rose 3.5% to S$20.0 million, as compared to the financial quarter ended 31 March 2016 (“2QFY16”). 2QFY17 distribution per Unit (“DPU”) increased 2.4% to 2.51 cents compared with a year ago, with no management fees taken in Units1. On a quarter-on-quarter basis 2QFY17 DPU held steady as compared to the DPU of 2.51 cents for the preceding quarter ended 31 December 2016.

Mr Jack Lam, Chief Executive Officer of the Manager, said “We are pleased to deliver another healthy set of results and stable DPU performance notwithstanding continued challenges and uncertainties in the market environment.”

Gross revenue for 2QFY17 was S$40.2 million, 3.2% higher than for 2QFY16. Similarly, net property income (“NPI”) saw a 4.1% rise on the same basis, coming in at S$30.0 million. NPI on cash basis, excluding the effects of recognising accounting income on a straight line basis over the lease terms, increased by 9.5% year-on-year to S$30.6 million for the quarter. These positive performances were underpinned by overall stronger results from the Australian portfolio coupled with the stronger Australian dollar, despite an offset by effects of lower occupancy rates at China Square Central and Alexandra Technopark.

The Manager will be applying the distribution reinvestment plan (“DRP”) for the distribution for 2QFY17. The DRP provides Unitholders with the option to receive their distributions declared either in the form of Units or cash, or a combination of both.

FCOT reported healthy portfolio committed occupancy rate of 91.8% as at 31 March 2017. The overall rate for the Singapore portfolio was 89.0%; while that for the Australian portfolio was 95.3%2, underpinned by continued full occupancies at Caroline Chisolm Centre and 357 Collins Street.

New and renewed leases amounting to approximately 119,100 square feet of space, representing about 4.0% of the portfolio, commenced during the quarter. The weighted average rent reversion for these leases, which were predominantly within the Singapore portfolio, was 3.6%4.

In respect of the S$45.0 million asset enhancement for Alexandra Technopark which was announced on 23 January 2017, the main construction contract has been awarded and preliminary works have commenced on site. Expected to complete around mid-2018, the revamp will transform and upgrade Alexandra Technopark into an even more attractive business location with a refreshed and contemporary look, lush green environment, greater connectivity and integration, and a generous offering of wellness, lifestyle and social amenities, among other things.

Mr. Lam said, “We are excited by the commencement of the asset enhancement works at Alexandra Technopark, which are aimed at providing our tenants with a vibrant, green, enriching and well-balanced environment. These improvements will at the same time greatly boost the marketability and long-term competitiveness of the property for the benefit of FCOT.”

This announcement may contain forward-looking statements that involve risks and uncertainties. Actual future performance, outcomes and results may differ materially from those expressed in forward-looking statements as a result of a number of risks, uncertainties and assumptions. Representative examples of these factors include (without limitation) general industry and economic conditions, interest rate trends, cost of capital and capital availability, competition from similar developments, shifts in expected levels of property rental income, changes in operating expenses, (including employee wages, benefits and training costs), property expenses and governmental and public policy changes and the continued availability of financing in the amounts and the terms necessary to support future business.

Investors are cautioned not to place undue reliance on these forward-looking statements, which are based on the Manager’s current view on future events.

The value of Units and the income derived from them, if any, may fall or rise. Units are not obligations of, deposits in, or guaranteed by, the Manager or any of its affiliates. An investment in Units is subject to investment risks, including the possible loss of the principal amount invested.

Investors should note that they have no right to request the Manager to redeem their Units while the Units are listed. It is intended that Unitholders may only deal in their Units through trading on SGX-ST. Listing of the Units on the SGX-ST does not guarantee a liquid market for the Units.